The Trust’s Regeneration Plan for the Basin in 2013

Posted on April 17, 2018 by Faversham Creek Trust | Leave a comment

has not really changed since 2013

Read how we saw the Bridge then

Since 2011 the Faversham Creek Trust has been working towards a regeneration plan that focuses on the upper part of Faversham Creek above the Brents Swing Bridge. The plan was first submitted to the Local Plan forum of the Creek Neighbourhood Plan Steering Group in November 2012. What appears here is a brief overview, revised for submission to the Faversham Town Council in November 2013.

We believe there is a unique opportunity for change in the centre of this historic town with significant economic and social benefits for residents and visitors alike. Our plan is based on the creation of a viable maritime economic facility, with workshops, moorings and a training school to serve the existing fleet of traditional vessels in the Thames Estuary.

The plan will be a team effort, with combined effort from several stakeholders including a charitable trust, a community association, identified private investors, and local and regional authorities.

1. The regeneration of Ordnance Wharf as a single-storey marine workshop with office and community centre with access from Flood Lane, in conformity with the current local plan, the existing conservation area, and the plan now under preparation by the Brents Community Association. A potential purchaser has been confirmed subject to Ordnance Wharf not being re- zoned for housing. Implementation mid-2015. 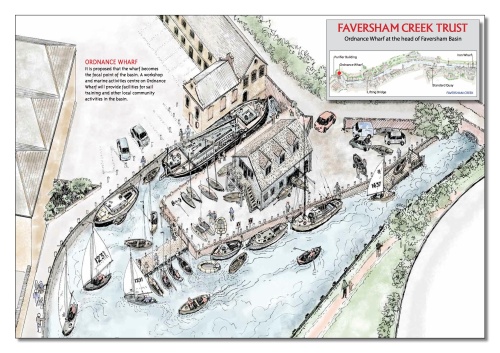 2. The existing restored Purifier Building to be a training centre for students and apprentices to be run in conjunction with the Ordnance Wharf workshop. The five year plan envisages 18 students with an eventual capacity for 36 students per year. Implementation late 2015. There are also two specialist workshop units and a room for community activities.

3. The restoration of the BMM Weston Creek frontage outside the existing car park with the co- operation of the owner, on a long lease in exchange for the restoration cost. The resulting wharf (with back filling of a new piled frontage from the waterside) will provide moorings for up to ten sailing barges and smacks and a green amenity space along the current footpath. A private company will meet the cost of the operation to commence when the KCC has replaced the current swing bridge. 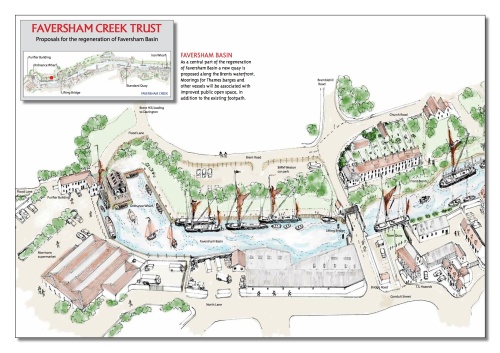 4. The replacement of the existing swing bridge by a new, opening bridge – by Kent County Council as a collaborative project in partnership with the Borough Council and the Town Council.

5. The repair or replacement of the sluice gates by Medway Ports and their subsequent management and dredging by the Faversham Creek Trust under licence by the authority.

The Lifting Bridge opening at High Tide for an awaiting barge, with another waiting to come out.

The benefits arising from the regeneration are:

We envisage that construction could begin in 2015, preceded by a planning application in 2014. The continued commitment of the KCC to a working bridge to the basin and confirmation of the existing zoning are key conditions to the success of the plan.